a cat sleeping on a sheep: it's not all corruption all the time at sunshine on the hudson!

This was the runt of the kitten litter with the lamb that almost died after birth. They have been interested in each other since the beginning. Last evening, Ollie, 10, put White Star on Rosie's back. Looks nice up there. If you listen carefully, you can hear the cat purr. 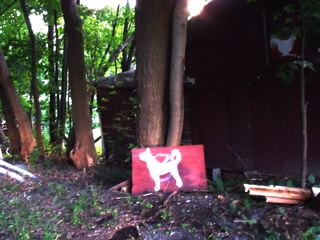 Here is the Register Star article on the legalistic portion of this vendetta. Here is the story on the vandalism. When the law isn't working for them as a weapon, they grab a spray paint can. Same guys in both cases. Different methods.

Both stories fail to mention this, which I guess is fine.

On our local Yahoo forum, Peter Donahoe said, "Signs defaced by vandalous fascists" that "many of the White on Red dog silhouette signs have been defaced in the last day.. well just wait until you get pushed around by bullies and look for help from someone..." 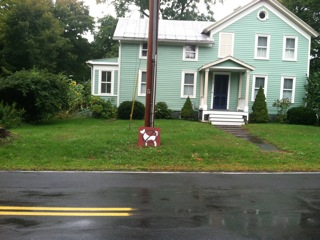 Christian Sweningsen said, "I'm surprised - and I'll be surprised when the swastikas appear, too."

Michelle Richardson responded, "Vandalism has been ongoing. There are dog signs in the creek by the bridge, someone took the VFW sign letters to spell messages, and other activity in the West Ghent Rd area. I imagine any noise-sensitive neighbors that may have been sitting at home, might have noticed the extra traffic breaking the silence of hamlet/hamlet extension zoning."

Look at this video to see the official government response to this and other acts of vandalism:

I painted those myself, with my kids. They mean something to me. Thank you to everyone who put them up. 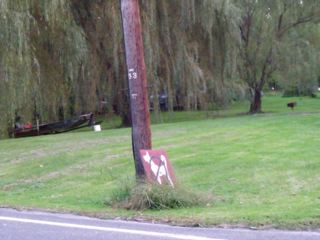 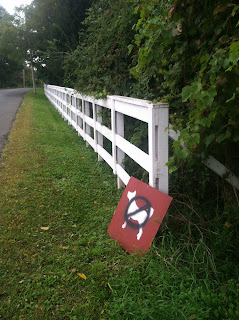 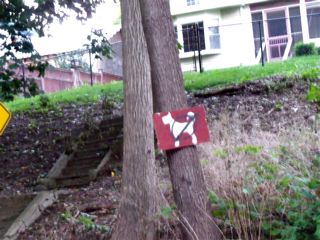 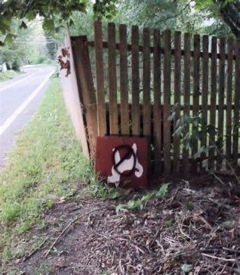 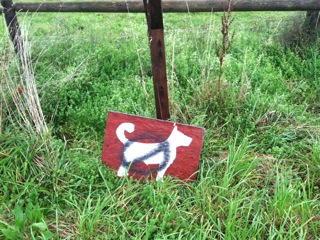 Posted by Unknown at 3:06 PM No comments:

how many mean people can one small town have?

Don't get distracted by dog barking and keep your eye on Sleepergate.

Video from the hearing below, just a snippet. It's hard enough to talk in front of a room without being interrupted all the time. They don't read the paper when I give it to them and when I try to put it in their ear, they tell me to stop talking. Was I talking to them? Not really. I was trying to talk to the other people in the room, and to the video, to post here. Why not? The meanies don't listen.

Listen to Aenne at the end of her speech. It's all true. They wreck our property, shout "X" in the street,  racial stuff, bizarre stuff on facebook about children swimming.

What the hell is this? How about this? A member of the government wrote that note and put it into the public record. Who? They won't say. How about this? Nice? Or this? What does Al Sharpton have to do with my family, other than both his family and mine contain black people in them? Here is the fire chief, also on the ZBA stopping me from speaking last night, telling me to move out of town. We have posts about my children and family, calls for violence, racism, telling me to move out of town by a town official. And here is board member threatening more violence. Violence, vandalism, racism, perverted facebook posts about my children swimming naked. A fine bunch of people here in town running the place.

All you need to do is go to Google maps and then do 1/R^2 or, if you can't do that, drive by and roll down your window and listen. You don't spend $200,000 on lawyers for a dog barking complaint.

If you had a two year old traffic ticket, would the judge dismiss it just because its two years old? Seems like a good idea.

Tomorrow night the Stuyvesant ZBA has called for the 20th hearing and 3th public hearing on a dog barking complaint by a former resident that defies the laws of physics, as no dog barking can be loud 1000 feet from the source. The hearing is to determine whether or not the town zoning officer was right to cite me for loud dog barking on August 9, 2010 based on the hearsay allegation that a neighbor who has since moved away complained of loud dog barking 1000 feet away from the source of the sound.

From the Stuyvesant Zoning Ordinance, page 37:

The following procedures shall be applied when enforcing the provisions of this ordinance.

No complaints were filed in writing prior to August 9, 2010. The notice itself claims to be based on complaints, not the personal knowledge of the ZEO. Therefore, the notice of violation must be dismissed as deficient.

Further, the claim of loud dog barking at 1000 feet is impossible, as verified by four PhD acoustical engineers including the editor of the world's leading peer review acoustical architectural journal:

Further, a sound test was done with ZBA members present that perfectly supports the conclusions of the studies indicated above:

Video from test in August 2011:
http://www.sunshineonthehudson.com/2011/08/third-sound-test.html

Other sound test showed the same thing, as in April 2011:
http://www.sunshineonthehudson.com/2011/04/mountains-of-video-and-audio.html

Here is a map of the area showing that people who did not complain live closer than the distant neighbors who complained:
http://wikicoco.com/file/view/map.pdf/365563558/map.pdf

Here are the distances in feet:
http://www.sunshineonthehudson.com/2011/03/distance.html

Here are some of the more than 50 letters of support:
http://wikicoco.com/file/view/sample+letters+of+support.pdf/365563502/sample%20letters%20of%20support.pdf

Here is the ex-neighbor who supposedly complained saying there is no problem at all:
http://wikicoco.com/file/view/fritz-platt.mp3/365561684/fritz-platt.mp3

Here is the ex-neighbor claiming to see dogs 1000 feet away to the NORTH over an 8 foot fence through a window facing east that is 14 feet from the ground:
https://vimeo.com/26307171

In short, this vendetta is motivate by unconstitutional motives and serves no public interest. Tomorrow's hearing should not be occurring. Knock it off.

PS I filed and served an appeal in the Third Judicial Division today.
Posted by Unknown at 12:27 AM No comments:

tonight at the board meeting

Also, tonight at the re-scheduled town board meeting (with no public notice) in Stuyvesant we learned that 1) they had an executive session for a "personnel matter" -- insufficient description according to Public Officer's Law -- after which someone, who knows who, slipped out the back door and sped off in a new grey Honda sedan and 2) the town of Stuyvesant is selling off its highway department equipment for unexplained reasons.
Posted by Unknown at 12:06 AM No comments: