PANDORA'S BOX OF ROCKS: Escrow Accounts Pay for Whiteman Osterman & Hanna's Services at the Discretion of BP $ ACCIONA
Posted by Unknown at 8:25 PM No comments:

my mother on aids in africa

Posted by Unknown at 9:38 AM No comments:

Instead of an elephant, Republicans should have the snake as their symbol. And the democrats should change from the donkey to the jellyfish.

If Republicans nominate Newt Gingrich, however, then they will have to move to the platypus: as funny as a duck, only funnier than a duck.

Posted by Unknown at 9:19 AM No comments:

Roy Brown seems to be changing and growing. We all can learn from his example. I met with Mr. Brown on 1-17-2011, talking about attorney invoices for over an hour with observers, and found that he was indeed concerned about corruption in government. I appreciate Mr. Brown's initiatives.

Big story here. Sleepergate.
Posted by Unknown at 8:40 AM No comments:

City of Troy settles with Sanctuary for Independent Media after shuttering center in 2008 for free speech reasons, now funds media art there

Sleepergate.
Posted by Unknown at 8:31 PM No comments:

Here is a town that fired Whiteman, Osterman and Hanna for double dealing. If only Stuyvesant and now Ghent would wake up and smell the garbage.

Sleepergate here.
Posted by Unknown at 8:45 PM No comments:

cover up under way?

If you are hear to read about the scandal in the Columbia County Attorney office, click here. You know, with the guy getting paid to sleep. Sleepergate.

Now the latest, an email I shot off this morning.

Posted by Unknown at 8:57 AM No comments:

This chart is from the Institute for Equal Protection, Ha! at the Bureau of People Acting Like Jackasses at the United Nations.
Posted by Unknown at 10:09 PM No comments:

about work, on the other blog.

On my other blog I wrote more about what it means to work 21 hours in a single day.
Posted by Unknown at 11:39 PM No comments:

Sleepergate: nice work if you can get it

Imagine a job where you get paid $150 to $200 per hour for sleeping, with pension, insurance and paid holidays (when you get paid to sleep, the idea of a holiday is kind of strange but, yes, the sleepers get paid holidays). Is this a dream?

No, welcome to the very special world of the Columbia County municipal attorney. Right now rich lawyers are getting paid in their sleep with your tax money.

If an attorney were to bill for 21 hours of work (at as much as $175 per hour) in a single 24 hour period, we might conclude that either 1) the man is a machine who does not urinate, defecate, eat or sleep; or 2) Holmes is billing for time he spent snoozing in bed.

The man we are talking about is Tal Rappleyea, the man who is or was in 2011 the designated Town Attorney in Durham, Ashland, Prattsville, Lexington, Cairo, Stuyvesant, Austerlitz, Copake, Chatham, Greenville, Jewett and assistant attorney for Columbia County. The day of 21 hours of billing is October 1, 2010.

On October 1, 2010 Tal Rappleyea billed the above towns and Columbia County for 21 hours of work. That day was not way out of line of the other days I've looked at so far: there are more days over 15 hours billed in a 24 hour period than under. Even on his birthday, October 4, he billed for 13.5 hours -- he took it a little easy, as it was his birthday and all. He only worked 13.5 hours.

In 2010, by double and triple billing the man earned well over $200,000 from the towns, plus another about $44,000 from the County. Not satisfied, Rappleyea also steals benefits from the county for which he is not eligible.

I emailed the County Attorneys today to get clarification on this stuff. They refused to comment. So if I get some details wrong, it's kind of their fault. They are welcome to correct me and I will adjust anything I may have gotten wrong. Here is what seems to be the case, the scam.

The attorneys, including Rappleyea, then calculate what hourly rate they would have to receive in order to work 30 hours per week, as would make them eligible for pensions and other benefits, then charge that hourly rate, whatever the number comes out to be. For example, rather than bill 5 hours at 150 dollars per hour, which may be the regular fee for that attorney, the would bill 30 hours at 25 per hour. The amount paid for the week may be the same but by lying about the numbers of hours, the attorneys steal pensions and benefits. And there is no way to know how many hours they actually worked, if they did any work at all.

Rappleyea bills Columbia County $27.24 per hour and the town of Chatham $175 per hour. Say what? But you see, it's a pension scam. He would never work for $27 an hour. He doesn't really work ever, actually, he sleeps, has coffee, makes some calls, goes to some meetings,  collects his dough. And his pension. I say when you put down "6 hours" it should mean 6 hours.

Other County attorneys work for towns and other clients, certainly including County Attorney Robert J. Fitzsimmons and likely Deputy County Attorney Andrew B. Howard. Just like Rappleyea, they are billing towns or other clients by the hour and collecting a salary from the county.

I wrote to all of these people today and asked if they would like to deny this statement: every single one of them is defrauding the government by claiming pension and benefit credits they don't deserve in the scheme I outlined above. I said, in my email, please deny this: What Rappleyea is doing is not exceptional: you are all stealing.

I got no response. They won't deny it. None of them deserve pensions. Why not at least deny it before I publish? They are all getting pension credits? More crazy billing in that list of names up there somewhere?

I only have hard evidence for Rappleyea. The people noted here, Stack and Fitzsimmons, refused to supply the records for the rest of the crew. If they were in the clear, why not give up the time sheets?

If Rappleyea's time sheets were exceptional, why not tell me that? You can excuse me for thinking his time sheets are not exceptional. When it says "hour" to me that means 60 minutes of work.

How many people at 401 State Street knew about this scheme? Certainly I told everyone in the County government before I wrote this blog entry. No one bothered to explain anything. What's to explain?  Shut up and go away.

Open season on the taxpayer in Columbia County. These rich guys, like Rappleyea, steal the sales tax my business brings in a year in 5 minutes.

If Rappleyea were a Democrat, he'd be in jail already. Double billing, stealing pension: his rap sheet is longer than the issues in this blog post. He is guilty of a number of crimes over a couple of years. More than one town, more than one man.

Quitin Cross, Hudson Democrat, got two years for much less, credit card fraud, a couple thousand. Pegeen Mulligan-Moore worked for Democrats and stole $380,000. Went to jail for hard time. Any Republicans get indicted by any Republican DA? I know Democrats steal. So do Republicans.

Will, where are the documents to prove all this? I got them. I would post them, no problem. First, I would like to see some of these people deny some of this, explain why they did not respond to my requests to show me the documents that prove the stealing of benefits is not widespread.

The ball is in the court of the County Attorney's office. I looked at the documents. I saw fraud. I emailed for an answer. Silence.

What's the deal? Anyone buy this grid? 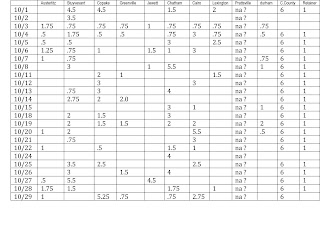 I read this: http://www.salon.com/2011/12/31/progressives_and_the_ron_paul_fallacies/singleton/ and decided I'm for Ron Paul, warts and all.