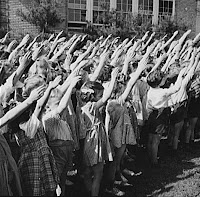 Back in the days of Americans doing this quite familiar salute, people were killed for sitting the pledge out. That picture, all those kids doing the "Nazi" salute, that's America.

And the supreme court said that you could be kicked out of school. Some took that decision as a green light to lynch the refusniks.

In my experience, the ones who say the pledge the loudest have the least idea what the constitution actually means.